Prologue of The Razed Ruins 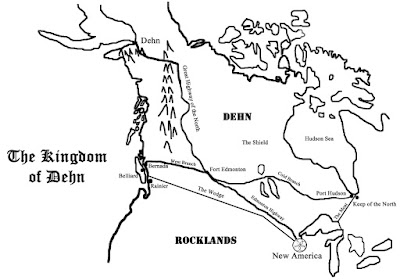 A tunnel of black, leafless trees closed around the rider. This is no night to die, he thought. But some malice was drawing near, he felt it. Like cold eyes leering through crooked gorse. He glanced over his shoulder. The road was empty. The only sound was the cadenced clop of his horse's hooves on the rime-dusted highway. The only sight the crescent moon darting through the naked branches like some phantom bird. He fixed his gaze ahead where the Great Highway tapered to an inky void.

His horse was exhausted, close to collapse. He'd coaxed the poor beast between trot and canter ever since the letter had landed in his care. His fingers slipped into his lapel pocket and closed around the folded parchment. His mind turned to it more and more.

As a rider in the Order of the Post, ferrying messages all across the realm was his life. But this mission had been unprecedented: he'd been tasked to carry a single letter.

Post riders, "featherfoots" as they were called, never made such a long journey for a solitary parcel. It was simple economics. This detail of the commission alone had raised his guard. Even more unnerving, however, was the seal melted over the folded corner: the double eagles of the Supreme Chancellor.

It was reprehensible for a letter's seal to break, especially if the seal in question was of the royal palace. Even worse, though, it had been under his care when the parchment worked free.

The letter arrived at his station in the hand of a featherfoot he'd never before seen. A sum of three gold pikes was offered for the effort, more than double the usual rate. He'd been thrilled by his lucky chance. But now, this deep into the hated North, he'd give the coins back and more to return and refuse.

He'd pulled out the letter subconsciously. Again. He knew the addressee by heart:

The Shield. He shivered. He didn't envy the featherfoot on the next leg of the journey who'd have to traverse through there.

Yes, reading the letter was forbidden. And yes, he eventually failed the test. It inscribed by a hasty hand:

He knew it all now by heart. Lock down the dragon. For the thousandth time he guessed what it meant. Probably it was code to shield the true meaning from prying eyes. Like his. But the initials, S.G., combined with the seal of the Chancellor, made it hard not to assume that the hurried-but-still-tidy handwriting could belong to none other than the Supreme Chancellor herself.

And there was the Shield. Every man, woman and child in all four kingdoms knew the tales about it. The rider's bowels stirred with excitement and dread. Maybe it's not code at all. Maybe the old legends are true.

As night lengthened, so did its merciless teeth. The rider snugged his wool cloak. I hate the North. He was a man of Rocklands and felt like an intruder when ordered to make deliveries in Dehn. It was a strange land, with evil, barren landscapes and grim, dark-haired people who spoke in coarse tongues. At times, he rode through Pent or even Seldor for weeks, and though the culture there was quite different than back home, he never felt nearly as out-of-place as he did in Dehn for even the briefest visit.

At times, he rode through Pent or even Seldor for weeks, and though the culture there was quite different than back home, he never felt nearly as out-of-place as he did in Dehn for even the briefest visit.

The glowing stationhouse windows blinked through a break in the trees, blazing like beacons in the colorless wilderness. It should have been comforting—something familiar in an alien sea—but instead, it only re-kindled his dread.

A letter from the Supreme Chancellor delivered to me by an unknown featherfoot. Destination: the Shield. Seal broken. Me responsible. The whole thing was ludicrous. How could he have been so foolish?

He eased his horse to a stop and dismounted gracefully. With a deep breath, he flattened his gray tunic, which bore only the winged foot that was the emblem of the Order. He didn't bother lashing his horse to the tethering pole. As soon as the letter was delivered he planned to commence the return south immediately, even if that meant riding through the night.

With the closed door in front of him, he straightened his back and sucked down a slow inhale. Forging his face into a look of confidence, the rider rapped the wood three times.

Inside, a ribald man lounged with his feet propped on a low table. His oily, shoulder-length hair formed a messy curtain over his eyes. Deeply stained fingers clutched a smoldering pipe, smoke billowing like flowing runes . He wore the same insignia on his brown tunic: the winged foot.

"You're late." His voice was throaty and baritone. A pale keloid clove his right eyebrow.

"Off duty." Tobacco haze blurred his face. The rider frowned. It wasn't just unusual, it was counter to codified featherfoot principles. "You're here for the delivery?"

The rider mined the letter from his pocket. The scarred man rolled his broad figure upright and extended a long arm corded with muscle, hand open expectantly. The rider hesitated then deposited his charge. It should have felt good to be rid of it.

"You broke the seal." An accusation, not a question. The rider retreated a step.

"It came open on its own!" He tapped the hilt of his rapier.

The scarred man stepped forward again, brushing his cloak to the side to reveal a black scabbard and the hilt of his own glistening sword.

"But the seal is broken. And from your watch. You know the oaths. And this bears the royal seal!"

He laughed. "You're lying. I can see it in your eyes."

The rider gauged his odds against the much larger man. He'd been selected to the prestigious featherfoot order for being light and fast in the saddle. But after crossing the wide realm too many times to recount he'd learned a thing or two about defense. Still...

"I would swear to it. Hand on the Holy Book!"

"What man, alone on the Great Highway, could resist such temptation?"

"I did not read the letter!" He tried to sound confident, certain he failed.

The scarred man took another stride forward and the rider, a step back. The dance continued until his back met the door's iron handle. The scarred man stopped, flaring nostrils only feet away.

The scarred man smiled. "I believe you."

He wheeled away with a laugh. The rider exhaled.

"I take my vows seriously." The sooner I start back for home the better. He aimed to be as far from this place as possible by daybreak. "Tell you the truth, I'm glad to be rid of it. I want to get back south into Rocklands. It's so—"

He didn't see the knife coming. Only a fleeting glimmer as the cold steel reflected the room's only lamp. His world flipped over in blinding, searing pain. Shocked and speechless, he grasped at the hilt of the blade protruding from his chest. A scarlet rose of blood blossomed down his tunic.

The rider made a feeble attempt to draw his sword, but his strength failed too fast. The scarred man puffed his pipe casually.

As the rider dropped to his knees, then to his side, the world eddied slowly away to black. The last thing he saw was the scarred man neatly placing a hat atop his head and stepping over his body for the door.

READ Next Part: Chapter 1: To The White City