"And he sayeth to me, 'My sweet Queen Tala, I took all of my most prized relics, the greatest heirlooms of the greatest house that ever was, and buried them in a chamber so unfathomable it will be forbidden to all but the most worthy suitors. And God help them should they solve its mystery. May their hearts be true, for the power they discover within will awe all the world.' "

It is these words, laid out in Omar: the True Story from Those Who Knew Him Dearest that kindled the legend of the Forbidden Chamber, the mythical cache for the treasures of Omar Roberts I, the Hero King. The account is purportedly written by Tala Roberts, Omar I's fourth and final wife. Many scholars, however, posit numerous explanations for why the account and reality might be divergent, from heavy-handed embellishments by a so-called "ghost writer" to intentional deviations from the truth by Tala herself. One popular theory suggests that the book was actually fictionalized much later, perhaps has late as 1350 NE, three and a half centuries after the Hero King's death.

Although the legend of Omar's Forbidden Chamber—usually thought to be located in his luxury fortress of Shamala—is perhaps the most broadly-syndicated myth in the modern canon and has drawn the interest of countless historians and tomb raiders for many centuries, no indication of any secret treasure has ever been discovered. So little evidence has been found, in fact, that recent decades has seen a steep decline of interest in the pursuit of the Forbidden Chamber. Chamber Hunters, as they were once called, are now all but extinct.

"What are you reading?" 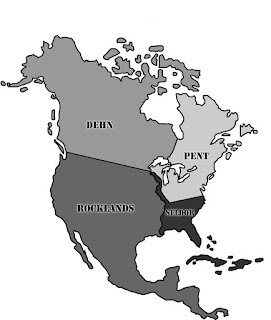 The fiery gaze of the sun filtered down through the gossiping leaves of a cottonwood onto Vallario Roberts where he sat beside the crystal-cool water of a murmuring brook.

"Legend of Omar," he replied to his twin sister, Galia, as she wrung soap from a beige tunic. Vallario thumbed the book closed and dropped it into his leather rucksack.

Galia leveled her eyes on him. "You're not thinking about that again, are you?"

"I know you don't believe in it." Her stare was heavier than gravity as he tossed pebbles in silence. "At least it takes my mind off..." He trailed away pathetically. The embarrassment was still too fresh to say the rest. Even to his twin.

Galia scooted closer. "Don't think about it. I'm sure she just—"

Galia crushed her lips together. "It doesn't matter what she thinks! You're too good for her anyway!"

Val tossed another pebble, more firmly than the last. No one in the family ever faced such an insult.

"Are you excited to see the capital, Val?"

Val was happy to entertain a new subject. "After three weeks in that miserable carriage, I don't care where we stop."

"You never had the stomach for traveling," she laughed, flipping her curly, golden-brown hair over her shoulder.

"It's not that I don't have the stomach for traveling," said Val. "I just...I just have a hard time sleeping on the road."

"We've stayed in inns more than half the nights. And besides, how many times have you left Tahala in your entire life? Honestly?"

"How many times?" She inclined an eyebrow.

"Father is always asking you to come along when we travel. Mother too. But all you do is barricade yourself in the library and pore over books about the Forbidden Chamber."

"I like where we live! Why would I need to leave?" His face was getting hotter.

"Don't get angry!" Galia giggled. "As for myself, as a woman grown, I understand the need to respect and experience culture. I know you are still just a boy...."

Union law defined that a girl came of age at 16 but boys had to wait a full year longer.

Val was saved from having to concede by a terrific splash. Crystals of water ejected from the pool, soaking both twins. Val jumped up in alarm, tripped over his bag and toppling to the ground.

For a moment there was no response. Then, piece-by-piece, their two-years-older brother emerged from a scruff of oak brush, grinning victoriously.

"How could I resist?" Pall boasted. "When you make such easy targets?"

Val dusted himself off. "What have you been doing?"

"Just stretching my legs," Pall responded, but Val noticed his hands fidgeting with something in his pocket. "Tomorrow we'll finally be in the White City. Couldn't come soon enough, if you ask me."

"Oh, please," Galia complained as she inspected her clothes for mud. "You both can be such...cowards."

"I'm just anxious to get to the party," their older brother said with a dismissive wave. "I don't know why father is making us stop. We could be in the capital now if it wasn't for—."

"There you three are!" interrupted a booming voice. A lord in a dazzling violet robe loomed at the top of a small rise, his fists pressed into each hip. "Your father commands your return. The caravan is ready. We have to make it withing range of the city by tonight!" After a pause he added, "It does not do for princes and a princess to be late. The Five Year's Fair will go on with or without you." He spun away and vanished.

"I see Master Sallano is in a wonderful mood," said Pall.

Christofer Sallano was master of counsel to the throne of Shamala. Other than being the top advisor to Val's father and mother, he'd also been a mentor, instructor and friend of Val's since he  was a young boy.

The Five Year's Fair will go on with or without you. Val didn't need to be reminded of their destination; his anxiety had been growing like a thundercloud with each passing league. He'd begged to stay behind. There was nothing Val disliked more than crowds and chaos, and this Five Year's Fair was expected to be the largest in decades, perhaps ever. Besides, since he was not yet of age he wouldn't be allowed a vote when the lords and ladies sat down to select the next supreme chancellor.

But of course his father had insisted. This year's fair, he'd informed him, was important for two reasons: first, it marked the 300th anniversary of the founding of the Union, and second, Lady Sandra of House Gonsales—perhaps the most broadly respected supreme chancellor the realm had seen in a century—had reached the end of her 15-year term limit.

"The royal family will all be present," his father had said. And since he was Sean Roberts II, King of Tahala, his word was final.

The three siblings gathered their things and scrambled back to the carriages. To their surprise, the King sat in the driver's seat, grinning merrily.

"Your mother wanted to sleep. I took the excuse to relieve Kiwen of the reins." He smiled down on the siblings. "Entertain the desires of an old man and allow him to enjoy the last of the Lonely Highway with his children!"

Galia giggled and jumped up beside him. Val quietly followed. Pall, however, stayed firmly planted.

"Pallar," the King bellowed. "I want my oldest son at my side."

After a show of reluctance, Pall filled the seat to his right. The King grinned as he coaxed the horses forward and the caravan began to roll. "It's still a long ride to the capital."

Posted by Writers on the Storm at 2:10 PM