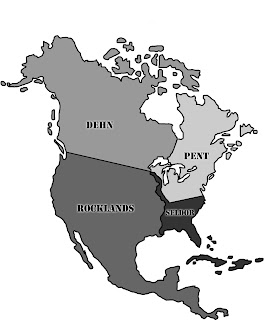 
Posted by Writers on the Storm at 2:52 PM No comments:

Stranded: Near Epic on Monitor Rock of Independence Pass

Opinions are like, hmm... well, everybody has one. Want to share yours? Visit my Speculative Worlds Forum

Posted by Writers on the Storm at 1:34 PM No comments:

There was a man who stood on the great stone steps of a Victorian library, or maybe it was a mausoleum, staring out into the sea of a city. The mathematical skyline was punctuated by great masts that penetrated high into the troposphere where airplanes drew equations across the sky. Cars and buses and trolleys and hot dog stands on wheels and people and pigeons navigated the streets in one great, multi-directional migration measured by perfectly quadrangle grids (north to south growing progressively by number; east to west in single, alphabetical leaps). There was immensity beyond calculation.
As the five o’clock hour waxed the numbers bulged exponentially until the entire sea became one living beast or monster swelling and ebbing and swelling and ebbing as if following the moon. And in the cracks in the sidewalk at the man’s feet other tiny worlds existed. Ants the shape of buses or trains, pebbles magnified into mountains, fractures like great chasms or fjords and rain-drop rivers. And even deeper where tiny mites clung to the ant’s backs and took rides and crawled to the top of the pebbles and planted colored flags like Edmund Hillary. On the mites were horizons of bacteria hording, procreating, feeding, developing. They forged cultures of their own, complete with customs and laws and Newtonian physics. Inside them were universes of protons and ions and electrons revolving spastically around bright, sun-like cores of energy. And if, with the world’s tiniest knife, he could sever these electrons, things too small for names would spill out and squirm into existence. Nano-universes that everyman crushed with each step he took. The man could gaze even deeper still until everything began to repeat. Fractal universes expanding, withering, duplicating, and expanding again.
The sun, with the power to illuminate universe after universe, cast a certain five o’clock shadow that defined the square of the man’s jaw, the flex and relax of his temporomandibular joint. And if he turned just the right angle he became a woman. A little further, a man once more. The spiked buildings above spun and oscillated around him like the pulse of the ocean. The liquefaction of the universe.
The water refracted the buildings. Added a certain shimmer, a crepuscular focusing then dilution of the sun that exacerbated color and portrayed a certain splendor like the speckled fish swimming elegantly that the man had caught when he was young and lifted out of that water. But out of the water the colors weren’t the same and there had been nothing graceful about the way it flexed its lips and drowned in the air.
By evening the light fell and the outline of the steel monoliths and towers of the city became one ominous form, blacker even than the sky above. The tallest masts maintained their distinction even until the very last moment.
The man still stood on the steps, each foot on a different level. He was halved. Divisible by two. But the night fell and the shadow that defined his cheeks ruptured and expanded until he was reduced to form without gender, without self, divided between a million worlds. When the darkness was complete and the streetlights failed to ignite, someone approached the spot where the man stood until he could reach forward if he wanted and touch him.
But the man had become invisible.

Posted by Writers on the Storm at 3:24 PM No comments: 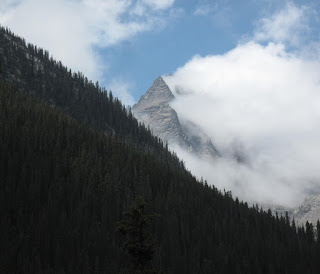 breath accompanies the chorus of wind
tracing hollow cliffs. The sandstone beneath
like the jagged stab in my lungs.
The air is polluted with

the cologne of sand, the dryness
of the desert, the faint musk of dead
juniper. The salt of sweat
trickles down to my lips.


Opinions are like, hmm... well, you know the rest. Everybody has one. Want to share yours? Visit my Speculative Worlds Forum

Posted by Writers on the Storm at 4:22 PM No comments:

Less Than an Half an Hour

Posted by Writers on the Storm at 11:54 AM No comments: