Ah yes, I'm back. You thought you were rid of me. You forgot you signed up for my mailing list. You scratched your head and wondered "who the hell is Brian Donald Wright" when I popped up in your inbox this morning.

Not so, my friends. I am alive and well, still stomping around in the Last Frontier. Still plonking away at the keys of my increasingly battered and outdated laptop. And I'm here to talk about, well, books!

A quick explanation of my long absence. I promise to keep it brief and get back to the action. 2017 was a great year for me and my blog, together we plopped out somewhere around 50 blog posts, nearly one a week. Me, my computer and my scattered readers (daring brave souls) whirled about the worlds of my imagination, exploring everything from Mayan ruins, writing pedantry, books, medieval shippery, and more.

So what happened? Well, in short, I got burned out. I poured so much into my author platform in 2017 that I found myself not having time for the actual thing...writing itself. And, because I hate excuses, I just got lazy.

Well, I'm back. And though I don't expect to return to hammering out a blog post every week, I will try to improve. Blog posts take a great deal of time. Perhaps I need to shorten them? Well, anyways, let's get back on topic.

Did I tell you I missed you?

A Journey in Words

When I wrote this same post last year, I said "Each book not only carries me away into a fictional dimension but also fixes my mind in the time and space where I read it....My year comes back to me, each book a signpost on the adventure that was 2017." Although I did not read as many books in 2018, this holds just as true as before.

When I remember Kazuo Ishiguro's Never Let Me Go, for example, I am taken back to the backcountry cabin where my loving wife, Ella, and I huddled through a chilly pair of January nights. It was here that I read that book's final 100 pages, enthralled right to the end. The second night of this trip I experienced my first earthquake, a 7.9 magnitude shaker that would have made for a great blogpost.... Another Ishiguro novel, The Buried Giant, was the book I lugged to Hawaii in April, so imagining that novel puts me back on those sandy beaches and at the toe of those verdant mountains. And so it goes, a story of my year in the form of the books that followed me everywhere I went.

As it were, I read 16 books this year, which I am sad to admit is eight less than last year. Not my best effort, though the sheer number is always what counts and several of these books were quite long. Without further ado, here is a brief look at each of them....

Never Let Me Go (Kazuo Ishiguro)
A literary classic in the dystopia genre. A group of children who grow up at a peculiar boarding school learn the horrifying reality about their culture and themselves. As usual with Ishiguro's works, Never Let Me Go places the focus on the power of subtle-but-crucial interpersonal moments. This is a unique and poignant piece of literary fiction from the 2017 winner of the Nobel Prize or Literature. 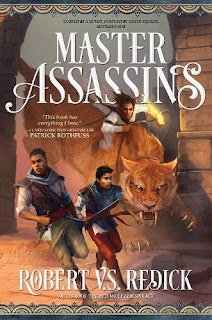 Part fantasy epic, part heist tale, The Lies of Locke Lamora is a clever and unique fantasy romp in a gritty, gory setting. Despite its long length Lamora was a page turner and one of the better fantasy books I read in 2018.

Master Assassins (Robert V.S. Redick)
The first installment of an upcoming series by a less-known author, Master Assassins is a well-crafted fantasy epic set in some sort of alternate middle east setting. Engagingly written and with highly developed characters, this is a worthy new fantasy series, though for me it lacked something to take it over the top.

New York 2140 (Kim Stanley Robinson)
Just over a century into the future and part of New York City is underwater after sea level rose 50 feet. A complex and lengthy bit of science fiction that works to be as much a tale of finance and politics than a dystopia thriller. I found this book to be slow and tedious despite it being nominated for several major awards.

Red Seas Under Red Skies (Sott Lynch)
The sequel to The Lies of Locke Lamora and continues right along the path of its predecessor. Though perhaps not as fresh as Book 1 of the series, Red Skies does its job as a sequel. I went out and bought book three almost as soon as I was finished.

Sing, Unburied, Sing (Jesmyn Ward)
A National Book Award winner, Sing, Unburied, Sing picks up where novels of the civil rights era leave off. A look at the modern south, and the work still in front of us in race relations in America, with a spice of the literary paranormal akin to the Toni Morrison's classic, Beloved. Despite its well-written prose, I found this book difficult to stagger through.

The Gunslinger (Stephen King)
An outloud re-reading of this classic of speculative fiction. Part fantasy epic, part dystopia sci-fi, part horror, Stephen King's Dark Tower series was what he called his Jupiter in the solar system of his imagination. Although The Gunslinger is perhaps the worst of the seven books in the series, this is where it all begins.

The Buried Giant (Kazuo Ishiguro)
The most recent of Ishiguro novels. Set in post Arthurian Britain, an elderly couple sets out on a quest to uncover an important piece of their history as a strange fog robs them of their memory. Ishiguro straddles the line between fantasy and literary in this book. Though I was largely unimpressed, the ending was one of the most powerful and though-provoking of any novel I have ever read and that is not hyperbole. 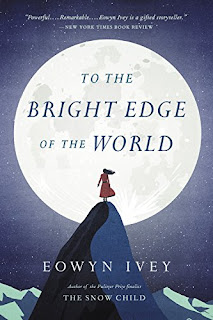 To the Bright Edge of the World (Eowyn Ivey)
This brilliant epistolary novel tells the story of a fictionalized version of a post-Alaska Purchase expedition in which the U.S. government was eager to learn just what it was they had acquired in "Seward's Folley" (the pejorative critics used for the Alaska Purchase which was brokered by William Seward). In Ivey's Alaska, the native myths are real and the struggles of the brave explorers and their families back home are visceral.

Metamorphosis (Franz Kafka)
A mega classic of literature, Metamorphosis was an "eat your vegetables" read for me. Every year I try to swallow at least one or two major classics and this year Metamorphosis was my selection. A short novel, Metamorphosis is an interesting albeit a bit dry read. It tells the story of a man who awakes one morning having been transformed into an insect and the repercussions that follow.

A Wizard of Earthsea (Ursula K Le Guinn)
An absolute classic in the fantasy genre, A Wizard of Earthsea is a story who is can be spotted at the roots of major contemporary tales, such as Harry Potter, The Name of the Wind and others. Succinct but original, this book drew me in and pulled me through to its final pages.

Less (Andrew Sean Greer)
A hilarious, poignant and brilliantly written literary romp about a gay novelist who embarks on a world tour to avoid having to either accept or reject an invite to the wedding of a former lover. The winner of the 2018 Pulitzer Prize for fiction, this novel proved that not all winners of this great award have to be violent or depressing.

Heroes, Gods and Monsters (Bernard Evslin)
This book of mythology covers the major gods of the Greek canon with brief, easy-to-read and remember treatments. For someone like me who enjoys the mythologies and detects their still resonating impacts on modern culture, this book is a great way to familiarize with the basics of the stories without getting bogged down in details.

The Goldfinch (Donna Tart)
A Pulitzer Prize winning novel about the repercussions of a terrorist attack inside a popular art museum and the far-reaching fallout. For me this book was tedious, overly detailed and a massive struggle. I was highly disappointed and didn't finish it.

The Raven's Gift (Don Reardon)
Reminiscent of some of my favorite post apocalyptic novels, The Raven's Gift unfolds the story of rural arctic Alaska in wake of a horrific plague that has wiped out most of the population. Facing isolation and winter, a man and his blind companion struggle to find their way out.

Best Fantasy
From The Lies of Locke Lamora, The Wizard of Earthsea, and even The Buried Giant, I read quite a few fantasy novels this year. It is difficult for me to select a single one as being the best not because I read so many good ones, but because none of them jump out as being particularly impressive. If I pull back, however, and just go on instinct, the book that feels like it had all the trappings I value in a fantasy novel was Master Assassins by Robert V.S. Redick, a narrow victor over The Lies of Locke Lamora. 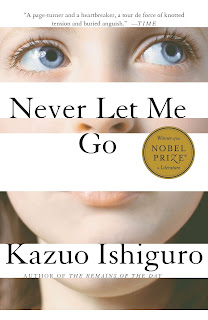 Looking back over my list for 2018, I see a gaping hole in the science fiction genre. In fact, the only two books that might fall in the category would be Never Let Me Go, which I have already listed under "literary," and New York 2140, a book that bogged me down for a month and I was so glad when it was over I made a "yuck" sound when I shelved it. So unfortunately this year, there will be no Sci Fi winner.

Best Literary
Although several of the books on this year's list straddled the line between literary and genre fiction, I ultimately considered five of the books I read this year to be literary. Of these, the one that had the biggest impact on me was Never Let Me Go by Kazuo Ishiguro. This strange but engaging book showcases the significance of the small events in life, and the poignancy of our everyday interpersonal connections.

If you enjoyed this post, consider signing up for my mailing list. When not reading as many books as I can get my hands on, I blog about all sorts of crazy, educational, entertaining, and occasionally funny topics from what makes an effective first paragraph to giant redwoods, medieval sailboats, the ancient Mayans and more. If you do sign up, you will get a once-a-week update on my posts and NOTHING ELSE! No spam, no selling your email to third parties. Okay, if I ever get around to publishing one of these works in progress that are constantly haunting me, I might send out an email letting you know. In the meantime thanks for reading!

Posted by Writers on the Storm at 10:38 AM No comments: