Children Are Our Future...Make Them Readers

Kids are our future. It’s a terrifying notion really. The modern kid is a smelly, noisy, selfish, fit factory. And the potential for blame could lie with many of societies numerous shortcomings: flailing school systems, overuse of the internet, video games, bad food, parents who are even bigger smelly, noisy, selfish, fit factories. But if our future depends on these pint-sized monsters growing up to captain our troubled world into the coming millennia, then frankly I’m concerned. We need a champion that can save this generation so they can save ours. 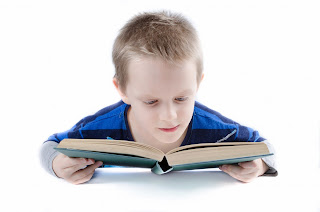 Not all kids are as bad as I made them sound. I'm not a parent (you may have guessed), but I'm an uncle. My nephew and two nieces (almost five, seven and sixteen) are all pretty inspiring. Above average, I would dare say but everyone thinks that about their own family, right? But seriously, my older niece has more wisdom as a teenager than I did at twenty-two, my younger niece has a greater knowledge of animal species than some high-school graduates, and my four-year-old nephew can drive a Tonka tractor like a construction wizard.

There are truly some kids, hopefully more than I give the world credit, who possess the skill sets and budding potential to bail us out of the muck pile we’ve buried our boots in.

We need more of them!

Congress recently added a new species to the Endangered Species List. It was a sad and terrible day when I read the news, for this species was part of what made the world the colorful, amazing, mind-mindbogglingly brilliant place it once was and still could be. That species? Critical thinkers.

The United States just suffered through its ugliest presidential election in modern history. Both sides unleashed volleys of hate-filled nastiness at an unprecedented volume. It was Total War. Nothing was safe. Rampant social media addiction has birthed an era where people rely on memes, not actual journalism, as the raw material to forge their opinion of the world. No longer can a person suffer through a two-thousand word article by someone who put in the time to research a subject thoroughly and whose writing was subjected to multiple layers of editorial oversight. Now we allow ourselves just enough time to view a picture and a sentence (usually promoting some clever-sounding but fallacy-packed pseudothesis) click “like” and move on.

How do we rescue critical thought from the brink of extinction? We need to cultivate readers. Coddle them like the California Condor, scrubbing their oily wings when the pollution of the world runs too deep, and monitor the minutiae of their development to ensure they don't disappear forever.

I don’t know about other countries, and those of you international friends could weigh in, but in the United States the problem to me is obvious: a sampling of the Facebook/Twitter rhetoric proves that a massive cross-section of our country is functionally illiterate. This huge blob of the population can't tell the difference between a valid, supportable thesis and a nonsensical, ridiculous conspiracy theory hatched straight from a backroom at the sanitarium. And if the decline in critical thought continues at its current rate, intelligence, careful analysis, good decision making and (by extension) almost everything good about the world will be gone in just a few short generations.

Children are our future. We need readers. Tyrion Lannister, an infinite source of entertaining wisdom, said, “A mind needs books as a sword needs a whetstone.” We need to encourage literacy.

How do we get kids to read in a world where it’s no longer a priority value by culture at large? There are so many distractions for children. So many things that pry them away from the pages of books. I've seen young kids holding smart phones they looked barely old enough to carry, and kids cross-eyed from endless hours of video game madness. Nowadays kids are more likely to proclaim that their heroes are the stars of reality television like Kim Kardashian or Si Robertson than a literary figure or character. Take away their smart phones. Turn off the television. Steal their video games. Not that they can't do these things some of the time, but for at least a few hours make them read a book.

Our future depends on it.

BONUS
One of my literary heroes, Dave Eggers, who is founder of the powerhouse literary journal McSweeney’s and author of the brilliant (though sometimes convoluted) memoir A Heartbreaking Work of Staggering Genius, gave TED talk a few years back on the subject of creating tutoring centers that encouraged reading and writing among children. His main philosophy? Make it fun! The video is a bit long (24 minutes) but his ideas are brilliant and if you are interested in a discussion of pedagogy and childhood learning it is well worth the time to watch. His ideas are applicable to many things beyond reading. The video is hilarious and entertaining. I’ve never shown it to anyone and had them say they were disappointed afterwards. The first time I watched it, I was inspired to go out and try to change the world one reading/writing child at a time. Enjoy!


If you enjoyed this post, consider signing up for my mailing list. I blog about all sorts of crazy, slightly educational, somewhat entertaining, and occasionally funny topics from what makes an effective first paragraph in a novel to giant redwoods, medieval sailboats, the ancient Mayans and more. If you do sign up, you will get a once-a-week update on my posts and NOTHING ELSE! No spam, no selling your email to third parties. Okay, if I ever get around to publishing one of these works in progress that are constantly haunting me, I might send out an email letting you know. In the meantime thanks for reading.

Posted by Writers on the Storm at 8:26 AM