The Comfort Zone. The most life-enhancing moments always exist outside of it. Inside, there is nothing but a blur of schedules, deadlines, and routines. But in those moments when you humble yourself to the unsettling thrill of adventure, that is when the truly rich glimpses of life come sharply into focus.
The last thing you want to see while donning nothing but a snorkel mask, a pair of board shorts and a flimsy set of plastic flippers is a six-foot shark swimming directly towards you. The white, tender skin of my winter-bleached body probably looked rather tempting to one of the world’s most successful predators.
Of course, it was only a docile nurse shark, a species listed as “mostly harmless to humans.” They were, in fact, the main reason our sailboat had come to this particular spot, known as “Shark and Stingray Alley,” along the Belize Barrier Reef between the islands of Ambergris Caye and Caye Caulker. But there is something about chummed waters infested with brownish-gray sharks, no matter how passive, that seems like a particularly un-appealing place to “jump right in” as our haggard captain, Captain Rob, commanded. I looked from my wife, Ella, to the school of sharks nervously. But after a playful giggle, she plunged over the ship's rail and into the aquamarine Caribbean water. With one last mistrustful glance at the grinning, sea-worn face of our captain, I followed.
Subsurface, it wasn’t just sharks we found. The Belizean coral was a bounty of angel fish, bone fish, tarpon, squid, stingrays, and countless blooms of vibrant and ethereal coral. As a mountain boy who’d spent nearly his entire life in the American Southwest, this world was strange and alien. After swimming for nearly an hour, however, I became comfortable enough to find myself as delighted as a kid at an amusement park, moving from one wonder to the next with wide eyes. 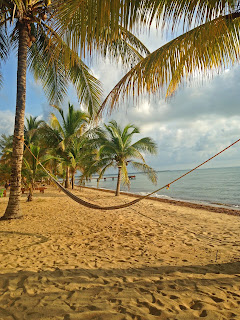 But snorkeling, no matter how fascinating, was only a small part of Ella and I’s 16-day journey to Belize. Belize, as it turns out, is an extremely diverse and multiethnic country, whose long, varied history has produced a pastiche of post-colonial and post slavery cultures. Vanished is the world of 1,500 years ago when the Mayan Civilization reached its mightiest epoch. Their distant descendants live on, however, speaking a unique language and preserving a modernized iteration of their ancestors’ religion. Vanished also is the era of British authority, and pirates like John Glover, who waylaid Spanish galleons from the now eponymous Glover’s Reef as they ferried New World treasures back to the Spanish homeland. The Belize of today boasts variety so stark it is not uncommon to hear any one of its denizens effortlessly bounce between three, and sometimes even as many as five, different languages in one conversation.
Our own journey was as varied and fascinating as the people we met along the way, and whenever we arrived in a new basecamp, a line from Monte Python’s “Flying Circus” was always on my lips: “And now for something completely different.” Almost two weeks after coming face-to-face with sharks off the coast of Caye Caulker, an even bigger mouth was about to swallow us: the yawning chasm of the Actun Tunichil Muknal Cave, known by locals and tourists alike as the “ATM.”
The ATM cave, listed in National Geographic as #1 on its list of Top Ten Sacred Caves, was buried deep in the jungle and far from the white sandy beaches and coral blooms we had visited so far. A ride down a long dirt road from San Ignacio ended at the cool waters of a jungle creek. Not as cold as the rivers of western Colorado back home, but refreshing on a day when the temperatures were expected to reach 104 degrees with over 80% humidity.
“From here, we swim,” informed Gonzo, our tour guide for the day. To protect the fragile archaeology, no one is allowed in the ATM without a guide.
One-by-one we jumped into the water and swam upstream into darkness. As the limestone closed around us, we entered one of the ancient cathedrals of the Maya. After rounding just one corner, the darkness was so complete not even the vague outline of your hand could be seen just inches from the tip of your nose. Ella was smiling as she clicked on her headlamp.
We climbed over jagged blocks of limestone, squeezed through fissures just wide enough for our shoulders turned sideways, and waded through water as much as neck deep. All around jagged pinnacles of calcium deposited by millions of years groundwater percolating through the porous stone formed ethereal stalactites and columns. This cave would have been an astonishing place to explore even without the archaeological treasures that lay a mile underground. 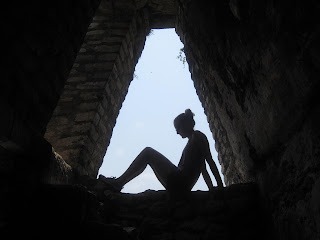 All at once we reached a wall. “From here, we climb,” said Gonzo. “No more shoes. But you must put on your socks.” These measures, he told us, were in place to protect precious artifacts from clumsy feet and the oils of our skin. For over a thousand years they had been preserved down here and hopefully they would remain for many more.
We climbed. We scrambled. We explored.
At first we found only pottery. Shards and eventually complete jars and pots, some filled with seashells from the distant ocean. “Offerings to the gods,” Gonzo told us. “And when the Mayans found these ineffective, they had to raise the stakes.” There was an ominous tone in his voice, and I soon learned why. “This way,” he called, beckoning forward with his hands.
He led us higher, to a vast chamber with thirty-foot tall formations and crystalline formations of jaw-plummeting beauty. But scattered at their bases were something not as beautiful: bones. Many, many bones. Victims of sacrifices that the Mayans hoped would appease their gods to end the long droughts or periods of war. There were finger bones from digits forcibly removed, and skulls with the telltale crushing on their backs indicating the “blunt force trauma” that had killed them. This wasn’t just a cave, it was tomb. Being here, in a place both sacred and terrible to those lost people, was more than a little uncomfortable.
But eventually we wended our way back out of the ancient graveyard. Back down the wall to the place we had left our shoes and slowly back to the final pool where actual daylight could be seen again. When we emerged in the jungle I was in a mood of silent contemplation. The Mayans, and the Belizeans for that matter, were a fascinating culture.
It was only three days later when my feet set back on American soil. The simple convenience of trustworthy tap water, reliable sewage treatment and roads not pocked with potholes so deep they could be called craters was a welcome change. It had been fourteen years since I had left the borders of our great country. Far too long, for I’d discovered that while at times traveling in a developing country can be uncomfortable, disgusting, and even a bit dangerous, there is no better way to plumb the depths of your mind, body and soul than to find yourself somewhere strange, somewhere new and see what you learn.

Posted by Writers on the Storm at 1:43 PM