As part of my recent effort to support and bring greater light into the rapidly expanding demographic of Indie/small press writers, today's post is the second in a planned series of spotlights on these less publicized writers whose books I've read and enjoyed.

In this post the spotlight is on Cindy Tomamichel. Her latest novel is Druid's Portal, a time-traveling romance that takes place alternately between modern times and 2,000 years ago during the clash of the Roman Empire with the Celtic Druids. Druid's Portal was published on May 17, 2017 by Soul Mate Publishing. I sent her a list of questions to which she was kind enough to supply answers.

Tell me a little about yourself. What is your background? What made you want to become a writer? 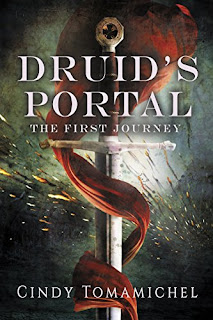 Thanks for having me on your blog, I read your adventures in Alaska with great interest.

I am from Australia, and have lived and worked in both remote mining towns and in the inner city. I have changed careers several times, starting as an underground mine geologist, working in mines in far north Queensland, Tasmania and New South Wales. I did some more study, and moved into environmental science with the EPA, with a focus on contaminated soils and groundwater, mostly from historical industrial sites.

I left full time work for family reasons, and started writing my first novel - a scifi action adventure. The idea came to me while I was trying to stay awake in some computer training, and I filled pages with seemingly industrious notes on an entirely different topic!  This was the more official start to writing, but I had been writing terrible poetry and bits and pieces of stories since a teenager.

Have you had any other works published? Where?

I have a list of my other work on my website, but I have had short stories and poems in three of the anthologies from Rhetoric Askew, and a short story coming up in a scifi anthology. I also had two monologues presented onstage with Madwomen Monologues, which was exciting to see.

Your book was a bit reminiscent of Outlander, though I thought you avoided straying into the realm of becoming merely a copycat nicely. It seems impossible, of course, to write a completely original novel these days. Who would you say are your primary literary influences?

I haven’t actually read any of the Outlander books, nor have I watched the series. I find too much politics and intricate personal motivations (such as in high fantasy novels) very hard to read myself.
I do read at random to find new authors, but favour action adventure, scifi and sword and sorcery. I expect this shows in my writing, as I try to keep a fast action plot going. So RE Howard, ER Burroughs, Peter O’Donnell (Modesty Blaise), Matthew Reilly and Andy McDermott in the action adventure genre.  Tolkien and CS Lewis for fantasy. and Heinlein, Harrison and Andre Norton for scifi. I do enjoy a lot of pulp fiction from the 1930’s- 50’s such as Leslie Charteris (The Saint), Agatha Christie and Raymond Chandler.

Tell me about the moment of inspiration for Druid’s Portal? How did the tale come to be?

I came up with the idea in about 2002, so I actually have only a vague memory. I had heard of time travel romance and wanted to see if I could write something in the genre that might be acceptable to a publisher. So I worked out what sort of time period felt the most interesting, and included my love of archaeology in the main character of Janet.

One of the things I love about fiction, and historical fiction in particular, is how it conveys a time and place. While history books can give you the facts, fiction gives a feel of a place and time. In that sense it is “truer than truth.” It also lays a burden of responsibility on the author to convey history accurately. Can you talk a bit about the historical nature of your novel?

It has been interesting given the time difference between when I started to now- the explosion of information and photos and google maps on the internet makes research much easier. But in some ways it is also harder – how much detail, and how much can I assume? So my focus was on giving more of a flavour of the time, and focusing on personalities and issues that are timeless.

The time itself is an interesting one – two barbarian cultures clashed, and the ancient druid religion was destroyed. The Romans were so different to the existing Celts, but they were just as brutal in battle. The area of Hadrian’s Wall was the line in the sand between these cultures. Excavation is still continuing in the forts along the Wall, and new discoveries are made all the time. For instance, I used the abundance of leather sandals found at Vindolanda to give Janet a bit of an obsession with Roman soldier sandals.

In my experience, one of the hardest things about writing a novel is the editing process. It takes far longer than the actual writing. What can you reveal about your editing methodology? Did you use so-called “beta readers”? Did you work with a professional editor?

Yes, I find editing hard. For me the hardest part is stepping back and reading with fresh eyes. I have written most of my novels during NaNoWriMo (Write a novel in a month) so once the draft is finished I leave it for a while, then correct for spelling and read through before I print it. Then it gets covered in notes, and I read sections out loud, particularly dialogue. I also have a few writing issues such as staying in point of view that I make an extra effort to pick up.

I worked with an editor provided by Soul Mate, Sharon Roe. She is amazing, and I think really made the book shine.

I never used beta readers. I have since found that arguing about my characters and why I did that with the plot makes me homicidal with rage.

How did you become connected with Soul Mate Publishing? Did you query agents first or did you approach them directly?

I approached them directly – they are always open for submissions, and encourage cross genre books. It has been a pleasure to work with them. I think I had about half a dozen rejections before that.

You mentioned in the “About the Author” at the end of your novel that you are working on a sequel. How is that coming along? Some authors find it challenging to make sequels fresh, original and still as engaging as the first novel. Conversely, I find many readers complain about them too. What has your experience been?

I actually wrote the sequel some time ago in a NaNoWriMo so it is well under way. While Janet and Trajan are in it, they are not the main characters, and I have given it a twist with some alternate history with a different timeline. So yes, I think a sequel can be difficult, but it feels like a new book with new problems – and more action and adventure!

Thank you for taking the time to answer my questions and best of luck in all future endeavors!

This is the second in a series of spotlights on indie/small press writers who deserve your attention. If you enjoyed it, consider signing up for my mailing list. I also blog about all sorts of crazy, educational, entertaining, and occasionally funny topics from what makes an effective first paragraph in a novel to giant redwoods, medieval sailboats, the ancient Mayans and more. If you do sign up, you will get a once-a-week update on my posts and NOTHING ELSE! No spam, no selling your email to third parties. Okay, if I ever get around to publishing one of these works in progress that are constantly haunting me, I might send out an email letting you know. In the meantime thanks for reading.

Posted by Writers on the Storm at 7:08 PM